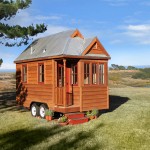 Recently I wrote a blog post for Psychology Today on tiny houses. It received some interesting comments and reminded me how differently we all think about simplicity. I was never attempting to say that tiny houses are the right way to go or that they work for every individual. My only aim was to highlight another unique avenue that exists to embrace simple living.

Tiny houses are small, cute, and efficient living spaces and the recent rise in ownership of these homes is an interesting phenomenon. These spaces seem like a great option for an active individual or couple that does not spend much time sitting at home. Since they are mobile, these homes are probably more beneficial if the owner needs to travel often.  While finding a place to park and keep the home seems like it could be an issue, it appears that the individuals who embrace this lifestyle make it work.

I initially heard about tiny houses in an interview I did for my research. After the interview I wanted to learn more and found a documentary on tiny homes by Kirsten Dirksen.  In her documentary, “We the Tiny House People” Dirksen interviewed various individuals who live in tiny spaces. Though these individuals are now somewhat well-known, folks like Graham Hill, author of a controversial op-ed for the NYTs, Jay Shafer founder of the Tumbleweed Tiny House Company, and Felice Cohen, whose tour of her 90 sq. ft. apartment went viral on YouTube after Dirksen first posted it, were originally interviewed and filmed for Dirksen’s documentary.

Thanks to Dirksen’s documentary and other videos, I was able learn about tiny homes and many other topics. The *faircompanies website opens up new possibilities for simple living; the endless resources provide invaluable information for anyone interested in learning more about simple and sustainable living.